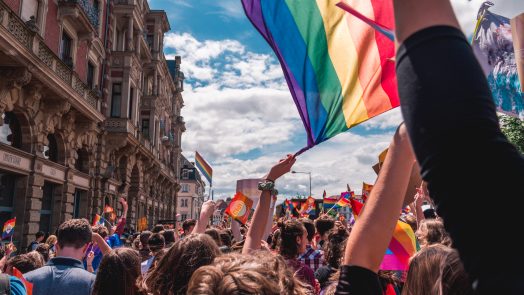 ‘The mental health toll of the marriage equality survey is still being researched. I watched my clients’ depression and anxiety skyrocket through sky-written messages of “Vote No”…’

In 2017, Australia held a plebiscite on Marriage Equality.  Well, actually Australia held a voluntary and non-binding postal survey that was supposed to be a plebiscite.  It devolved over the year and preceding months as the Turnbull government twice proposed legislation to enact the plebiscite, following an election promise by Tony Abbott, and twice was knocked back by the senate on the grounds that it was, and I paraphrase, harmful and ridiculous.

Regardless of what it was in the eyes of the law, for the LGBTIAQ+ community the postal survey was a winding and anxiety-provoking road to a national opinion poll on the worth and validity of their relationships.  Unfortunately, all our fears of a smear campaign against our identities were realised in posters promising child abuse and indoctrination into radical queer theory should the result be a ‘yes’.

The ballots were mailed in September and with them came a fierce debate – one my community had never asked for.  Of course, the ferocity of the fight was not matched by any official stance of the opposition’s euphemistic ‘It’s OK to Vote No’ campaign.  The ferocity came from individuals and groups on both sides.  On one hand, a community was fighting for its right to marry and have their relationships protected by law.  On the other, my best bet is the ferocity came from genuine fear: fear of change, and fear of difference.

In psychology we normalise anxiety by talking about how fear can be adaptive.  Fear motivates us away from things that might harm us, and for millions of years that has kept us alive.  We also fear things that are unfamiliar to us, for the same reason – avoiding potential harm.  Unfortunately, a by-product of this can be fear people who are different to us.

This fear is often compounded by another part of human nature: the need to fill in gaps of knowledge with assumed truths, and to categorise things.  When these objects are people groups, and these gaps in knowledge are filled with harmful stereotypes, our ignorance becomes fear, and our fear becomes hatred.  This in turn forms the basis of sexism, racism, homophobia and transphobia.

In the heat of the marriage equality debate, I was finalising my first dissertation in clinical psychology, on a topical subject: the intimate relationships of the LGBTIAQ+ community.  More specifically, the thesis investigated the relationship standards, beliefs and values of same-sex attracted people.  The results of my research reinforced what several decades of research have now taught us: the majority of same-sex attracted people desire stable, satisfying, long-term relationships just like anyone else.  We’re the same, not different.

My study expanded this research by demonstrating that, by and large, these people valued the same things – expressing their love and caring for one another, , for example – at the same rates that heterosexual people do.  That is, in loving relationships, we care about the same things, in the same ways.  Finding this, in the middle of that debate, made me want to shout my findings from the rooftops – love does that though.

Instead, I published my research in a Journal (link below), and did my best to keep it all together while the nation decided whether I’d ever have my dream of a husband, some kids and a dog.  I did my best to shout my findings on social media, and be patient as family friends, whose back yards I’d grown up playing in, accused me of pushing an evil agenda.  I also did my best to help the young people I volunteered with at an LGBTIAQ+ youth service as the nation argued over their validity as well.  My colleagues and I knew they’d need more support during the debate, but we had underestimated what we’d need, and the effects of this debate on us.

The mental health toll of the marriage equality survey is still being researched.  I watched my clients’ depression and anxiety skyrocket through sky-written messages of ‘Vote No.’ Personally I spent more nights cuddling my dog and crying over Richard Blanco’s Until We Could than I ever had or have since.  To me the poem highlighted the tenderness of what we were really asking for – the right to love, and to do so equally.

It’s been almost three years since the survey now.  Gratefully, eventually, yes came.  There’s still sweat on my palms when I think about it, and tears in my eyes when I listen to that poem (linked).  But I’ve watched our community grow and celebrate love and marriage.  I’ve watched as churches stumble on their journey to acceptance, and I became a marriage celebrant to do my part until they caught up.  I graduated and have been working with clients – LGBTIAQ+ and otherwise – to support mental health ever since.  In my second dissertation, I’m investigating relationship satisfaction in LGBTIAQ+ couples to better support these relationships in couple’s therapy.  We expect to again find sameness with heterosexual couples.

Written by Nick Baker. Nick is a gay Christian psychologist (provisional) living in Brisbane and currently finishing a Masters of Clinical Psychology. Nick is passionate about supporting and advocating for people and couples of diverse genders, sexualities, faiths and cultures to navigate these intersections and find acceptance in themselves and society.

Images used are sourced from uplash.com