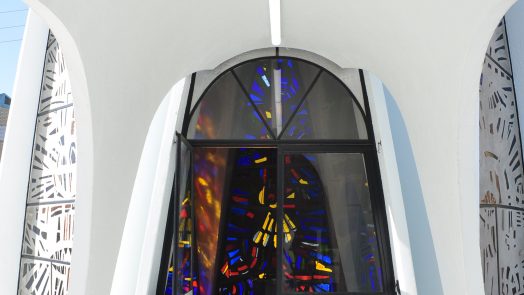 I often forget I was raised by my mother as a Muslim.

I remember it when it comes time for Christmas celebrations, Easter masses, when someone bows their head in prayer, or mentions Jesus or the word Bible. I remember it because in that instant I recall that I am was not born privy to this particular world of ritual, knowledge, community or representation.

When I used to go to weddings and christenings as a photographer, I went to many churches and synagogues – places deemed as sacred spaces – not only because they were given this meaning, but because there were these designated areas that I could capture the special event in someone’s lives, and other places that I was not permitted to enter or stand on. I understood this on a cerebral level, but I still felt like a strange sense of shame, even though I never stepped outside of my ‘designated photographer territory’, and tried in earnest to comply…I felt the wafts of an exclusive knowledge that I did not possess.

This is the tension that sits within me about churches, about communities – who belongs, who is excluded, who is a ‘member’ and who is peripheral. I am deliberately being non-binary here when I ask these questions, because the responses are fluid over time, space and place. Who feels like they belong and when, with who and where?

I found the world of commercial photography a bit empty after a while, and not seeing myself amongst the people I worked with – where were the female, non-Anglo, working class displaced & migrant family, public school educated photographers with chronic illness and trauma?? – I found social work.  As a social worker I need to ask these questions about social justice and exclusion, but inclusion is equally personal.  Structures may perpetuate injustices, but here we are as real people feeling the brunts of other people within structures. And therein lies the loop.

Being new to Brisbane, I drove past the massive concrete structure that sits on a steep incline that is Holy Family by accident. I was trying to navigate the roads back to my new suburb, attempting to use the lit towers on the top of Mount Coot-tha as I drove (there are so many hills in Brisbane and most of the time I can see these as beacons calling me home!), refusing to use a GPS, because it would stop me from taking in the landmarks, the particular trees, the fences, the unique perspectives and view being in a place can give. The cues of belonging.

My vision of Holy Family was met with an “Oh wow” – what a structure! Appreciating modernist design, from the brutalist car park near the centre of town, to the butterfly rooftops of my suburb, Brisbane offers a visual and spacial feast to the senses. I mentioned this experience in passing to Ann Edwards, and so were the beginnings of my inclusion into this conversation. When I was invited to Holy Family for a discussion about the church, the building and community with this beautifully diverse group of people, I felt the push of difference (where will I stand to take these photos?) and the pull of curiosity. But the most important message: I was allowed in!

As I took photographs of the church, I remembered why I don’t take many photos at all these days, let alone do this professionally. My vision has declined, and it is really hard for me to see through a viewfinder.

But I experienced Holy Family as a visceral, rather than a visual space. The rawness of the concrete inside, this building material that is associated with strength, also serves a humility. I have not seen such a commanding space feel so humble. Perhaps that’s because it’s not gold and ornate – elements I do associate with places of worship more generally.

The structure of the Catholic Church, the church as a building, the local community that this space serves – I felt all of these tangle as we walked through the space as a group and I attempted to capture what we saw. As I look at the photographs I took from the visit, I keep noticing two things; a small group of people (all COVID safe and physically distanced) who were part of this conversation, and the shine to Mother Teresa.

Looking at the shine to Mother Teresa, I recall many stories from my father about their shared heritage – both from Albania – a tiny poor country that usually only gets mention in films citing organised crime, and I saw a social and gendered representation of myself. This, along with the images of Jesus painted directly on the concrete walls – like they are coming out from the building itself – gave me the physical markers of race and ethnicity that feel safe to me.

Our little group led by Ann and Father Michael, listened and talked. We looked up, around and we stood silent. We stayed in the background of the photographs. The space held our big questions. This is what I would expect a church (as building and community) to do. Yet Holy Family did this in a way for me that I had not experienced before. I walked in from the street with awe, being comparatively very small to this giant building, but I did not feel this way inside. I felt connected. Not only to this new small group of people, but to the space itself.

Dr Sera Harris discovered while working in the field of commercial photography that it was the people on the other side of the lens that were her interest. Sera is now a social worker and Senior Lecturer at the Australian Catholic University, specialising in community development and mental health.