Looking for the story beyond the stories 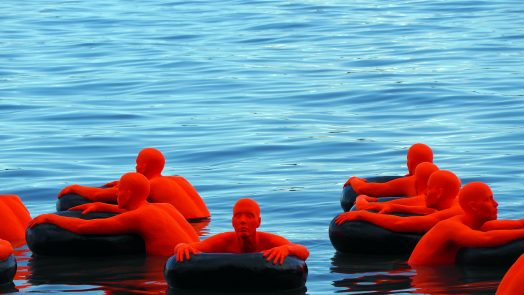 ‘It reminds us that a violent state that has weaponised the physical and mental disintegration of ‘outsiders’ can also turn that violence within… We can glimpse the uncomfortable truth that citizenship – as the institution through which to be recognised as a political subject – is exclusive, elusive, and fragile…’

The mini-series Stateless has been lauded for shining a light into the dark recesses of Australia’s immigration detention system. Originally airing on the ABC earlier in 2020, the series presented Australian viewers with an unflinching view of the cruelty and violence that has underpinned the nation’s relationship to those non-citizens who had the temerity to seek safety and succour on our shores by sea, without out permission. Through its release on Netflix in the US, Stateless is also providing a much wider audience with a glimpse of the pathos of the post-9/11, post-Tampa Australian national security regime, which was built on neoliberal dogma, institutionalised xenophobia, and a fierce ‘kinetophobia’ (a fear of movement). This regime reduced everybody (and every body) who crossed the sacred line of the Australian border as a potential threat to, and enemy of, the polity itself. National security became coterminous with border security, and unlawful migrants came to be perceived as the greatest threat to Australia’s borders.

“But my friends,” declaimed former Prime Minister John Howard in November 2001 in a campaign policy speech, “we will decide who comes to this country and the circumstances in which they come”. This ethos has shaped Australian immigration policy since the formal constitution of the Commonwealth in 1901, but the Howard government gave it material and institutional form through the system of remote immigration detention centres and a prohibitive and punitive bureaucratic process of refugee status determination. Indeed, immigration detention (while not new) became the centrepiece of the Howard government’s defence against an insecure world.

The six-part mini-series Stateless dramatises one of the most scandalous episodes in Australia’s post-2001 political history, namely the Cornelia Rau affair. While its creators disclaim any notion that the show is a true and accurate depiction of actual events, Stateless takes the controversy of an Australian citizen being sucked into the machinery of the Australian immigration system (by being declared an illegal/unlawful alien) as its source material. The story turns on the mental disintegration of the Rau-like character Sofie Werner (Yvonne Strahovski), an Australian citizen who disavows her own identity and political status as citizen in a desperate attempt to escape herself. Unable to confirm her assumed identity of a German national Eva Hoffman (accent and all), Sofie is left to languish in detention without the catharsis of deportation. It is through the tireless efforts of her sister Margot (Marta Dusseldorp) that the grave mistake is uncovered. By way of a sudden moment of conscience by the government official running the detention centre (played by Asher Keddie), that the drama reaches its denouement and the scandal breaks to the media. As with Cornelia Rau in real life, Sofie Werner is eventually freed from the clutches of the immigration system.

Much has already been written on the show’s supposed strengths, particularly the way that the narrative utilises the mental struggles of the Sofie Werner character are compounded though her detention as a lever to pry open the detention system and expose the harms it exacts upon all that are drawn into its remit. Lawyer George Newhouse has written that “the real power of the series is the way it uses people “just like us” [read: white, middle class, citizens] as a Trojan Horse to expose the racism, sexism, misogyny, dysfunction and violence of a privatised prison system implementing a policy of institutional cruelty”. Co-creator Elise McCreadie has been quite explicit about the strategic deployment of the Rau/Werner character to help audiences realise that the violence and harm exacted upon brown and black bodies in the name of national security can be exacted upon “us” too.

Indeed, there are many things to show does well. It captures the violence of imposed remoteness that underpinned (and continues to underpin) Australia’s immigration detention network. Just as the fictitious Barton immigration detention centre is depicted as being on the desert fringes, real-life immigration detention facilities relied (and continue to rely) on remoteness to keep their inhabitants far removed from the centre of public life and public scrutiny. The show is also respectful of the stories of the asylum seekers detained in the centre, giving them voice, space and opportunity to disclose their trauma and loss beyond the impersonal and dehumanising register of refugee status determination. There are also fine performances from fine performers, giving breadth and depth to characters so easy to portray as archetypal brutes or hapless victims.

But the show is not without its critics. The journalist who initially reported on the Cornelia Rau affair, Andra Jackson, has critiqued the series for failing to represent the important role that both news media and refugee advocates played in disclosing the failures that led to the (erstwhile) Department of Immigration, Multiculturalism and Indigenous Affairs (DIMIA) to incarcerate an Australian citizen for being an ‘illegal alien’, and for shining a light on the ways that the immigration detention system exacted unspeakable cruelties on those deemed to be undeserving of hospitality and protection. Vanity Fair television critic Sonia Saraiya has suggested that although Stateless attempts to draw together a wide range of different experiences, the overwhelming focus a handful of (white, Australian) perspectives blunts the force of its critique. More trenchantly, in her first contribution to this forum, Janice McRandal interrogated the ways in which the miniseries stateless failed to engage with the historical forces and structural determinants of the systematic exclusion of refugees and asylees from the shores of this country for more than two decades, and with the violent colonial history and present of the land itself.

In my view, Stateless can be read on one of two ways. The fact that the show’s creators are explicit in mining the real-life events of the Cornelia Rau affair give the viewer little choice but to view the show as a quasi-documentary text that reveals something of the injustices and structural and manifest violence that have underpinned the refugee experience in Australia. Through this lens, the show is deeply unsatisfying. Indeed, the great failure of the series is the fact that it aims to draw attention to the plight of so many refugees, asylees, and otherwise ‘unlawful’ migrants, who have suffered so much at the hands of the national security state, through the story of a (relatively) privileged white woman who had the misfortune of falling within its ambit. The interior life of Sofie (and its disintegration) pulls focus from the anguish of those forced to languish behind the chain link fence long before and long after the PR disaster has passed. These incarcerated outsiders are thus denied interiority of their own, and their individual traumas, memories and aspirations serve only to highlight the horrific injustice of the incarcerated insider. While their stories are woven together with those of the other characters, the harrowing stories of the main ‘refugee protagonists’ – Ameer (Fayssal Bazzi) and his daughter Mina (Soraya Heidari) – become secondary to the moral growth (or decline) of the other main characters, government official Claire Kowitz and local mechanic-cum-detention centre guard Cam Sandford (Jai Courtney). This becomes a story of a broken system that harms and corrupts all that are drawn into it.

Viewing Stateless for truth and verity end up reproducing epistemic inequalities and forms of representational violence. This is one of the great tragedies of contemporary migrancy: we often only seek to represent or understand the experiences of ‘Others’ only if these experiences are drawn in to the ambit of equivalency with that of ‘our’ own. The dehumanisation of asylum seekers only bites if we can see it happening to one of us: the secure, the enfranchised, the rights-bearing citizen.

However, we can view the series in another way. If we set aside the individual narratives of the protagonists and focus instead on the environments and encounters that it portrays, Stateless becomes strangely revelatory. While I think the ‘Trojan Horse’ approach to telling the stories of marginalised and excluded individuals is both cynical and unsatisfactory – and an indictment of the television industry – the dramatic (re)presentation of the Cornelia Rau affair offers the viewer rare opportunity to reflect on the collision of worlds that our political system is designed to keep apart: the world of the citizen and the world of the citizen’s ‘Other’.

Sofie is so conspicuously out of place in the detention centre that is populated with abject brown and black bodies, hypermasculine petty sovereigns, and unfeeling bureaucrats. This allows the viewer to consider the lines that separate the fates of those who can make claims as citizens, as bearers of rights, and as authors of their own fortunes, from those who are denied these fundamental freedoms. It reminds us that a violent state that has weaponised the physical and mental disintegration of ‘outsiders’ can also turn that violence within. It also reminds us that the manifest violence of the camps is underwritten by the structural violence of a neoliberal political order that makes this ‘solution’ to the crisis of unfree migration make sense. We can glimpse the uncomfortable truth that citizenship – as the institution through which to be recognised as a political subject – is exclusive, elusive, and fragile. We see how lives that are formally, legally and geographically separated are inexorably bound to each other by the entanglements that our institutions create.

Camps such as ‘Barton’ (or Baxter, or Christmas Island, or Manus), outsourced and out of sight, are institutional manifestations of neoliberalism and defensive nationalism. As we lurch towards a more uncertain world, we must reconsider how we understand the relationship between insiders and outsiders, especially when inside and outside are collapsing in on themselves. For all its faults (or perhaps because of them), Stateless provides an opportunity to confront the violent constitution of our institutions, and not just lament their tragic impacts.

Written by Samid Suliman, a Lecturer in Migration and Security at  Griffith University.

Images used are sourced at upsplash.com