“Often, stitching is a private and intimate practice which helps to address the reality of life or the monotony of a separate, distance existence. In some cases, stitch is used to confront the chaos of the outside world…”

It is almost Summer in Australia and a nation flocks to the sea. It’s a place of renewal, play and rest for many Australians as it is for others around the world. Alice Kettle’s piece ‘Sea’ (2017) at once connects with me at this time – a vast sway of rich blue/violet. Its immense size is undetailed but evident in the image below taken with the artist in front of her work. 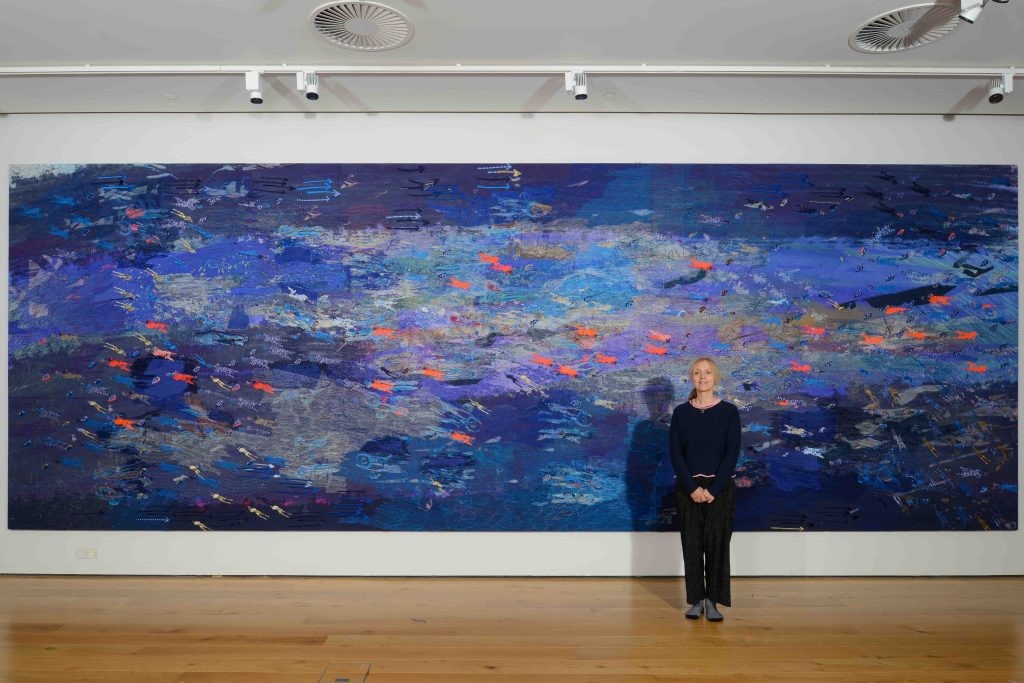 It reminds me of how large the ocean looms in my psyche, a product of growing up with many summers spent at the beach. The brightly coloured splashes of orange appear at first to be like schools of fish swimming across the painted and embroidered canvas but on closer inspection I realize they are bodies. Figures also appear in charcoal and gold. It’s not clear whether the figures are swimming, floating or drowning. Threads tumble around them as ocean currents, impervious to the presence of human forms. Faces emerge out of the water, heads just above water and I come to understand they are not all swimming.

‘Sea’ is Kettle’s attempt to make sense of the refugee crisis unfolding in her part of the world. In 2012 Kettle reflected that often “stitching is a private and intimate practice which helps to address the reality of life or the monotony of a separate, distance existence. In some cases, stitch is used to confront the chaos of the outside world…” (1) which is precisely what she is aiming to do with this work. It portrays her reaction to the blanket media coverage of refugees trying to flee across the Mediterranean and dying in places she had previously holidayed. Shock mixed with deep sadness is evident in her statement:

“We know that sea, where they’re drowning. The sea has become dangerous, where before we had played in that very sea. All that swimming we’ve done – if you saw a body sept up on the islands, how would you feel about swimming in it? We’ve seen it as a magical thing, this blue sea…” (2)

The sea, once a plaything, has become something darker. The ‘magic’ evaporated with the reality unfolding before her eyes.

The work’s aerial perspective serves to reinforce the impotence that Kettle felt as does the scale of the piece reflect the feeling of being overwhelmed. The viewer is removed from the scene as if flying over, agency removed, and only able to watch the tragedy below, playing out in a vast blue sea. The resonances with Australia’s experiences with ‘boat’ people are clear to me. I also watch the tragedies unfold from afar as people desperately seek to travel across the sea to safety in our far north. My country is girt by sea; a sea no less magical and dangerous as the Mediterranean sea.

Kettle’s work brings into sharp focus the paradox of the sea – a place out of danger but also into danger. Thick embroidered arrows across the top of the artwork highlight the direction to safety but they stop halfway. A space of escape has become a space many cannot escape from. In Australia we ‘escape’ to the sea for a holiday rarely reflecting that others’ escapes have not ended as well. ‘Sea’ lays out this reality in bold colour, the black bodies representing those that did not make it. It also holds a mirror to our remoteness from the situation of fleeing for our lives and our privilege of living in relative safety. A mirror that unsettles me and asks me how will I respond.

Kettle struggled initially with finding what she considered a valid response, falling for the trope of embroidery as domestic work and therefore is not a serious enough artform to comment with. Fortunately, she has turned this on its head acknowledging the existence of her own power and voice with ‘Sea’ becoming the first work in a collaborative project called Thread Bearing Witness .(3) In this project Kettle seeks to explore and connect with the world of refugees and asylum seekers and to bear witness to their struggle.

Bearing witness has become an important action in this current age of fake news, alternative facts and deep fakes. To bear witness means to “show that something exists or is true”.(4) This action helps to counter deniers, victim blamers and those who downplay the event.  It comes with great responsibility too as James Dawes highlights:

[The] “contradiction between our impulse to heed trauma’s cry for representation and our instinct to protect it from representation – from invasive staring, simplification, dissection- is a split at the heart of human rights advocacy.”(5)

In this work, ‘Sea’, Kettle says ‘I see you, I hear you and I’m going to tell the world about your plight’ to the refugees, tapping into a core premise of contemporary human rights work – that story telling makes a difference. By sharing stories, we aim to raise awareness and hopefully shorten the distance between ‘them and us’. It reminds me that the events unfolding on my country’s northern shore are not unique or localized. A response is needed that requires intergovernmental action on a global scale. In the meantime, works like ‘Sea’ prevent these issues from being forgotten once they slip from the twenty-four hour news cycle.

Two further works – ‘Sky’ and ‘Ground’ – have been created in collaboration with refugees and asylum seekers combining with ‘Sea’ to form an immersive triptych.(6) In this Kettle continues the story telling by drawing closer to the subject and inviting them to participate. In doing so she actively chooses to give voice to their stories rather than taking their voices to create the works.  ‘Sea’, however, remains the work for me with the most impact. It contains the thread of greatest connection and accusation. Its beauty does not hide its horror reminding me not only about the paradox of the ocean but more broadly of this world. The work invites me to contemplate how I can bear witness to the struggles of others and perhaps make some small difference to their ongoing story.

written by Susan Pietsch
Dr Susan Pietsch is a practicing artist, trained Veriditas Labyrinth facilitator and Spiritual Direction student in Brisbane, Australia. She works with a range of media to explore subjects of deep interest and to assist others in exploring their spirituality. With a background in digital media, Susan is currently employed by the Anglican Church Southern Queensland assisting a local Brisbane parish move into the digital age.