Moon over Mudgee – Always Was, Always Will Be – Wiradjuri

Tags: The Gallery, Always was, always will be, Glenn Loughrey, NAIDOC Week, Wiradjuri 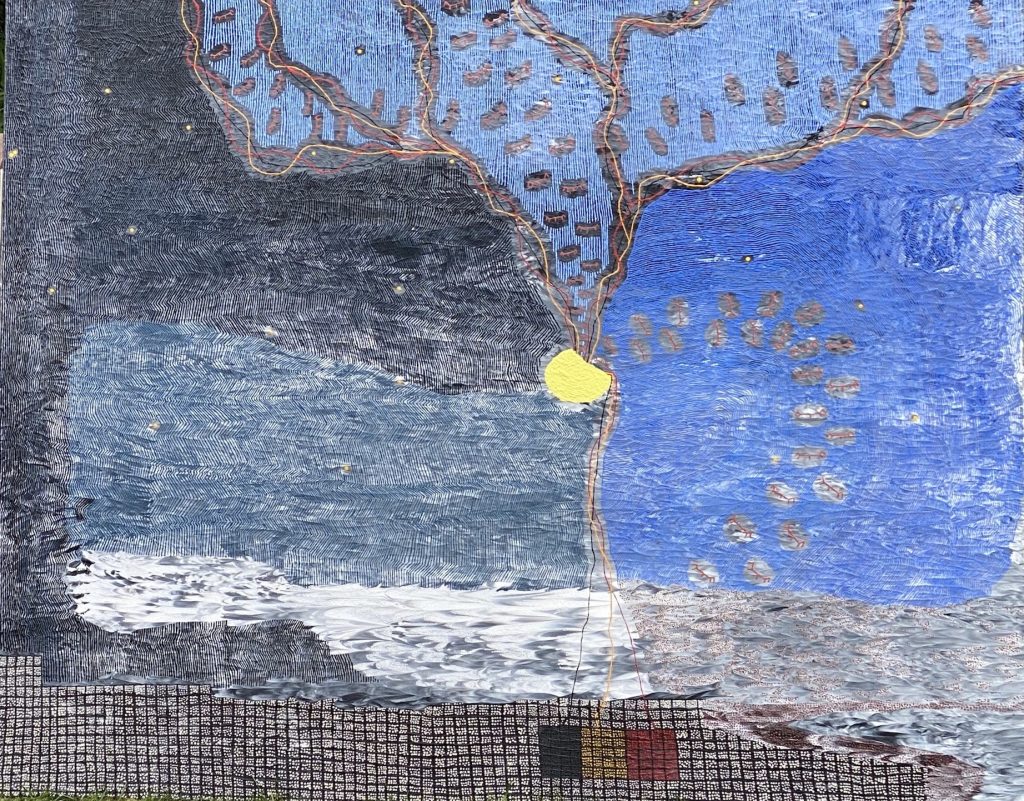 ‘Here the people spread out across and remain embedded in the soil. It always was and always will be Wiradjiru because country holds us and we hold it’

The Australian landscape is a contested space where the two competing stories of First people’s and Colonialist vie for dominance. Every space has at least two stories and it depends which one we preference as to the story that is told.

This painting explores the landscape that is Mudgee shire and the traumatic stories it holds. It was here that Wiliam Cox, it is suggested, said that the only way deal with this vermin, including women and children, is to exterminate it. 50 years later at the death of the alleged last local tribal man his mission appeared to be accomplished.

Stories of massacres, hunting parties, stirruping, poisoned water and poisoned flour were recounted by both sides of the conflict. These stories continue to be told by local people today. At the same time Wiradjuri people are returning to the town and playing a vital role in the life of the community.

This painting depicts the two stories separated by the moon which catches the Wirdajuri story and reflects it down to the earth and up to the stars. The idea that the people are indigenous of the universe is symbolized by the footprints across the sky, into the moon and down onto the earth. Here the people spread out across and remain embedded in the soil. It always was and always will be Wiradjiru because country holds us and we hold it.

As we are pattern people, if you look closely at the patterns in the painting you will see faces on both sides of the story as well as other images of people and animals native to this space. The painted image is just one of the many stories in this painting and the longer you spend in front of it the more it reveals to you.

This painting reflects my art practice which is to enter into a conversation with the canvas, the paint and the story I wish to tell. There is no design set and I do not pre draw or sketch. I simply begin with an idea and allow the process to reveal what needs to be included and what is to be left out. In this process many stories are told, as many as those who wish to give it the time it needs to open itself to you.

In our culture learning doesn’t happening in a linear manner but when the child or the person is able to and needs to receive the wisdom available. This picture is performative storytelling and asks you to be more than a spectator or viewer, you are to allow yourself to become a part of the performance so as to receive the wisdom within just for you.

In this painting I was challenged to let go of anger and allow a softer picture to appear. This picture picks up a sense of hopefulness for the future and not simply depicting the blood of people spilt. The colours which could have told the latter story become the evidence of our sovereignty and connection to country and the steady return of our people to this space.

This painting is in the Paddington Art Prize at DEFIANCE GALLERY – 12 Mary Place, Paddington NSW 2010, from Thursday 29 Oct to Sunday 8.

Written by the Artist, Glenn Loughrey. Glenn Loughrey is an Anglican Priest in the Diocese of Melbourne and Vicar at St Oswald’s, Glen Iris. Glen identifies as a First Nations Person and is proud to be Wiradjuri. He is an artist, writer and speaker whose style it’s at the intersection of the two worlds in which he lives, the First Nation Heritage of his father and the Englishness of his mother. His art and writing recognises both the originality and the similarity of his two worlds and is an authentic attempt to keep them in conversation.