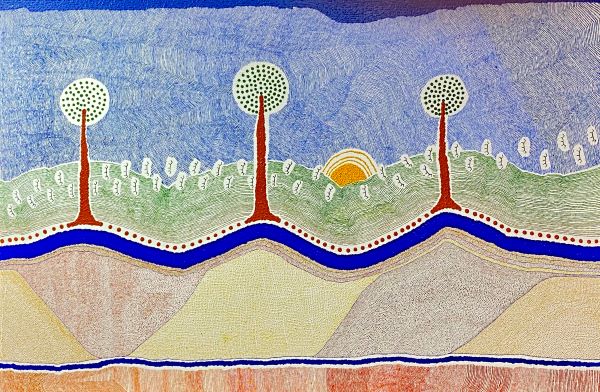 When reading this painting you will discover key ideas to understanding Aboriginality or the Aboriginal way of seeing, what you may call spirituality. It is a vertical slice through the universe or country – sky, water and the earth above and below the surface. Country is every thing you see…

Kurrajong Dreaming is the story of my country where the Kurrajong trees played a major role in the life of our people. The tree itself was like a supermarket. It contained roots which could be crushed for flour, seeds which could be roasted and eaten, leaves containing moisture, bark that could be used to make rope and carry bags and much more. My father used it in the dry or drought seasons to feed stock. A purpose for the tree was to bring up water from the water table and make it available to the trees which would have stood around them. Mostly now you see them standing alone in areas cleared of the native trees which used to accompany it and benefit from it doing its designated role.

In this painting they stand in a row across the landscape beside a river above the water table.

When reading this painting you will discover key ideas to understanding Aboriginality or the Aboriginal way of seeing, what you may call spirituality. It is a vertical slice through the universe or country – sky, water and the earth above and below the surface. Country is every thing you see – the horizon all around in every direction, the sky above and the ground beneath your feet from which you were born under a tree. These are key interlocking elements in our thought. What is in the sky (sky country) is on the country beneath it, on which we walk, and in the country that goes away below us.

This wisdom and knowledge is accessible to us via the patterns that combine to write the Dreaming stories and song lines echoing across the whole of our universe. Song lines are not simply linear connectors we follow on the surface but the means to transmit and explore the indigenous knowledge system all around us. Song lines encompass mountain ranges, rivers, coral reefs, island chains, star constellations, night skies, sun, moon and the various water and land formations under our feet mirroring that which is above it.

The patterns are always the same but they are always different; in other words they may appear to be the same but they may tell different stories in different places, seasons, time of day or night. and dependant upon who is viewing them. They change and shift as they do in this painting. There are patterns in the core of the earth (orange at bottom), in the soils that go to make the crust, the landscape above the ground  (green) and in the blue of the sky. The patterns change across a format and shift to create different stories at different times. The importance of water is shown by it being repeated three times in this painting: at the top, in the river and in the flow of the water under the ground.

In forming the patterns I always commence with an almost straight line. As Tyson Yunkaporta suggests, there are no straight lines in Aboriginal thinking, it always moves and changes according to its own desire and need. In the sky we move from an almost straight blue line on the left across the canvas with the stick I use for marking marks, paint and canvass working together to create patterns and shapes, some continuing, some disappearing and some working together to make something unexpected. I do not purposefully dictate what the patterns will be. My father would say, “Listen to your country and if you listen closely you will hear what it wants and what you are to do”. I trust the process and allow the shapes to form as appropriate.

In this painting an unexpected image appears around the central tree. If you look closely you will see two forms, the shape of Jesus on the cross with the head (tree) bowed forward so you only see the top of his head and above it you will see the face of an angel peering over his shoulder. There was no intention on part to achieve this, it just is.

This is another key aboriginal principal it is what it is and if you remain attentive you will discover all that you need to live in this landscape.

The feet moving across both sky and land represent the human element in this way of thinking. The symbol for human beings walking is this shape with a long line and five smaller lines, the toes. The feet or humans in this painting depict the Aboriginal idea of being in relationship with all our kin (land, sea, sky and all created beings, animate and inanimate, human and non-human). We are indigenous to our universe (as described as country above) and therefore we are citizens of the whole not just the ground we walk on.

As citizens of the whole we have a custodial ethic for all. As they all do for us. It is an ethic of responsibility and reciprocity and ensures we live in harmony and balance with all so that all can flourish.

Written by Glenn Loughrey, an Anglican Priest in the Diocese of Melbourne and Vicar at St Oswald’s, Glen Iris. Glen identifies as a First Nations Person and is proud to be Wiradjuri. He is an artist, writer and speaker whose style it’s at the intersection of the two worlds in which he lives, the First Nation Heritage of his father and the Englishness of his mother. His art and writing recognises both the originality and the similarity of his two worlds and is an authentic attempt to keep them in conversation.