Improvising faith in isolation – both together and alone

‘The choice of colours, the thickness and length of the wool all work together to create possibilities within the highly structured grid of the canvas backing. There was a sense in which the relationship between these limitations and possibilities echoed my experience of isolation…’

Our commitment to cooperate with community in 2020 has been marked by the call to stay at home and live in isolation. When we entered a period of lock-down in March, Australia took comfort from the idea that we were all in this together. In the second half of 2020, the city of greater Melbourne now has what is described as a hard border separating us from the rest of Australia and the message imprinted on the backdrop behind our daily briefings reminds us that Staying apart keeps us together. It now seems clear that we are all in this and we are both together and alone.

As an artist who works in many different ways in the world, time alone has offered me a chance to play, an artform made possible because of the limitations we have encountered this year.  “Play isn’t doing what we want, but doing what we can with the materials we find along the way” (Bogost, 2016). Doing what I can with the materials I find along the way has taken me into some interesting places. Early in the first period of lockdown as galleries were closed, I sought new opportunities to encounter art took a virtual tour of the NGV, where I discovered Kate Jutson’s 2018 work Rug. His colourful and retro latch-hook rug reminded me of my teenage self who loved the subject called Craft in the late 1970’s. Craft was a subject that was open to all whereas art seemed to be set aside for those students who displayed a particular talent. As a student in Craft I had made and submitted a latch-hook rug never thinking that it had anything to do with art. Seeing Jutson’s Rug on display in the NGV sparked a memory of a practice in Craft that had held and sustained my creative capacity for attention as a teenager who was scared to imagine what it meant to be an artist.

The work of making a latch-hook rug happens slowly and steadily as each of the individual threads is knotted in the canvas. The choice of colours, the thickness and length of the wool all work together to create possibilities within the highly structured grid of the canvas backing. There was a sense in which the relationship between these limitations and possibilities echoed my experience of isolation and so in March this year I decided to begin to play with the idea of making a iso-latch-hook–rug. In making this rug I have found both new and repurposed wool, all of which has been cut to length and knotted into place as an expression of prayer that is becoming and desiring to be whole.

Tin Ingold describes the form of a knot as having a “…supple necessity that admits to movement, as both its condition and its consequence. …a necessity born out of commitment and attention” (Ingold, 2015). The rug itself was born out of the commitment expressed in each knot and in this way, it speaks of the relaxed awareness that characterised my experience of iso–prayer and attention. Whilst the process of knotting could be considered repetitive and mundane, I found joy in the colour, texture and thickness of threads as they coalesced into the form of an iso-prayer-rug with the supple necessity Ingold describes. 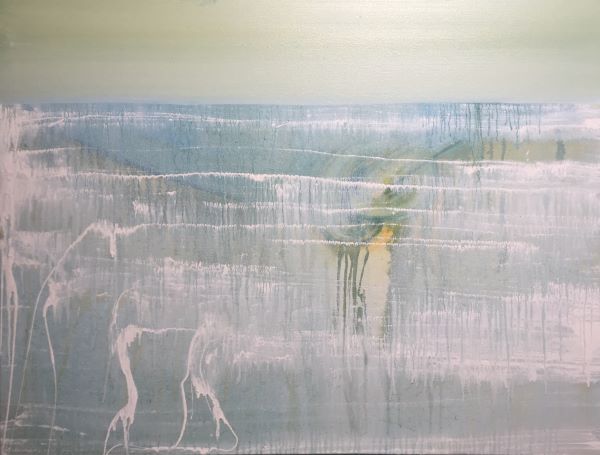 Meanwhile the work I have been painting throughout this time explores memory, isolation and what it means to throw out a line in the hope of connection, from this place. Memory VIII (fig.2) was finished in the same week that the Iso-prayer-rug was completed. The image is layered with experience and yet seems to remain open to translucent possibility. There is a knot, strong and supple, lying just beneath the surface. A warm light transcends an otherwise foggy foreground even as fine lines reminiscent of foam and water draw me to back to the surface. The warmth of light creates a wound in the surface, inviting me to wonder about what it might be like to reach for the knot and taking hold of the strong line that lies just beyond the surface. The presence of a horizon line reminds me that this image is holding open a place that exists between two different planes of existence, with a sure sense relaxed awareness. Both places and experiences are real and yet neither is prescient. They have found a way of being present with one another whilst creating space for the possibility that something more is still “…becoming rather than being” (Ingold, 2011) made known in this present moment.

As the incipience of lines emerging in these different planes becomes entangled. They seem to take delight in the connections they create with one another and in doing so, cultivate a sense of abundance rather than scarcity. The rhythm of this movement echoes the movement God is making toward me through these times of being together and alone. Samuel Wells (2004) has argued that God models this process of being with another throughout all of God’s story. Wells and sees God’s movement toward incarnation as a movement toward accepting and then over-accepting all that the world offers, in love, suffering, isolation and joy. He argues that the movements of being with and accepting all that the world has to offer, are part of an experience of faith characterised by improvisation. Being open to the improvisation of faith as we find ways to be together in isolation, is also an invitation to join together, repeating the story and movement that God is always improvising in reaching and holding us with a the supple necessity of a knot, that admits to movement as both its condition and its consequence.

As I begin work on Iso-prayer-rug 2.0, I know that the process itself is a reminder to over-accept the layers of experience that are part of living with limitations and playfully improvise my faith through a decision to commit to one thread, one knot and one day at a time.

Written by Libby Byrne (PhD, AThR), an artist researcher whose work follows the invitation and discovery of art into new ways of being with people in liminal spaces. Within her studio practice Libby works with ideas, images and experiences to extend the way we think, perceive and respond to questions of meaning and existence.

Libby teaches in the Master of Art Therapy Program at La Trobe University whilst developing a growing body of research in the emerging field of Practice-led Theological Inquiry. She works as an Adjunct Lecturer and Honorary Research Associate with the University of Divinity.

Bogost, I. 2016. Play anything:The pleasure of limits, the uses of boredom, and the secret of games. New York: Basic Books.