Blue Spring Skies: Yoko Ono’s Five Dots (2014) and other prompts for seeing beyond the image 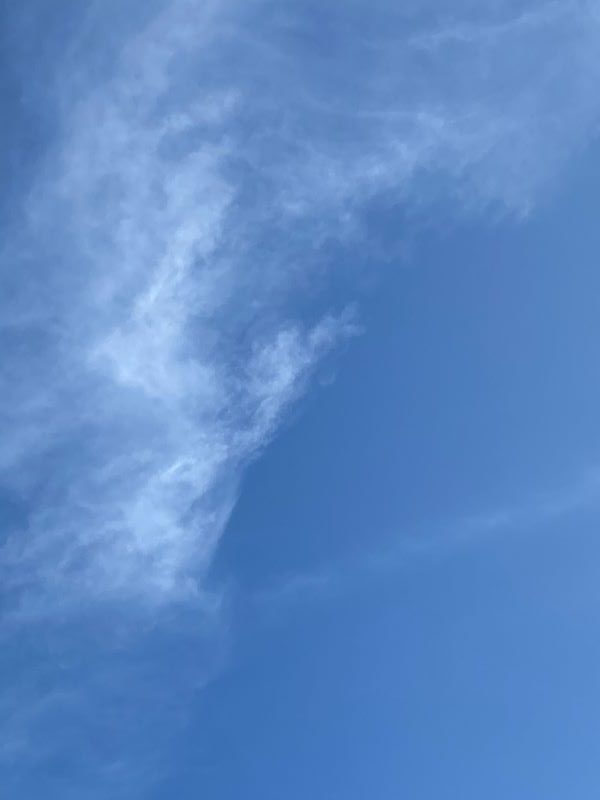 When my eyes can’t see past the given image, blue, spring skies really do bring relief, but, more than that, they remind me that new possibilities and ways of seeing exist.

Blue spring skies are sights for sore eyes. The occasional drift of cloud. Such relief! I had begun to miss the sky.

With news of California and Oregon alight, images of the 2019/2020 Australian bushfires come flooding back: footage of huge tracts of beloved, old-growth forests burning so big and hot they formed their own weather storms; homes and workplaces ablaze; vision of whole towns’ populations displaced and evacuated to nearby beaches or shelters; picture after picture of birds and wildlife, themselves iconic in the country’s psyche, lying blackened and dead in vast numbers. These images so conflated time and space that they demanded and captured the world’s attention and response. In this context, the image of Toni Doherty rescuing ‘Ellenborough Lewis’ was an image of consolation in the middle of a distressing state of emergency.

Along with so many images of that summer, the vision of Doherty running along the bushfire-ravaged roadside to rescue a koala from nearby flames is one seared into our collective memory. Press footage of the event shows the woman, wearing only a white bra, jeans and sandals, as she bundles the injured koala up (in the shirt she has just removed from her own body) before setting it down and dousing it with water. The creature’s cry is heart-rending; its pain, palpable.

In her essay “Precarious Life, Vulnerability, and the Ethics of Cohabitation”, Judith Butler emphasises that, sometimes, an image of suffering or distress functions as “an ethical solicitation”, even without our invitation.[i] Such a picture (however materialised or imagined), can function at once as “an imposition but also… an ethical demand.”[ii] That image of Toni Doherty bearing her maternal body to rescue Ellenborough Lewis demands something of us. Beyond feelings of empathy and national pride (icons were preserved that day), the image here demands that we think about what is not represented by it.

Writing on images of suffering, Butler states: “reality is not conveyed by what is represented within the image, but through the challenge to representation that reality delivers.”[iii] Thus, we are made to look head-on at the inadequacy of the image, at the gap/breach/chasm between the representation and the reality it means to represent.

The breach in the representation of Toni Doherty’s half-clad body was perhaps not lost on the journalist who witnessed the hopeful moment as it unfolded, and offered a spare shirt from her own bag, expressing a kind of quiet, gendered solidarity but perhaps also, inadvertently, an erasure of reality. Preoccupied as it was by the woman’s lack (of clothing), what the press image could not capture or convey is what Doherty’s actions—beyond ‘heroic’ and compassionate—really reveal: the ecstatic nature of a body in relation.

To be ecstatic is to be and act outside of any fixed state. With this, a different, bigger reality appears: of a subject simultaneously undoing blouse buttons and iconic maternal conventions, as she encounters and moves in relation to another utterly other, moving, relational subject. What the press reports of the day gave us were images in keeping with particularly one-dimensional ideas about what bodies, especially, female, maternal bodies, should do and be like in such circumstances. We were to be surprised and drawn in by headlines like “Woman in bra rescues koala from bushfires near Port Macquarie”,[iv] or soothed by descriptions which named Doherty only in terms of her maternal status, for example, as “a heroic grandmother”[v] (specifically of a grandchild named ‘Lewis’, after whom the rescued koala was subsequently named). But that wasn’t the whole picture. (She was too ecstatic for it to be so.)

Under what kinds of conditions then can we see what isn’t already given and circumscribed by the image? When my eyes can’t see past the given image, blue, spring skies really do bring relief, but, more than that, they remind me that new possibilities and ways of seeing exist. Yoko Ono’s Five Dots (2014) evokes a similar response, calling me to imagine what is not represented. This series of five images, shared by Ono on her Instagram page (@yokoono) in 2014, is in keeping with her body of instructional art works, including those most famously gathered together in her artist’s book Grapefruit (1964).[vi]In this volume, considered an important early example of conceptual art, Ono describes more than 150 art ‘events’, mostly with short pieces of text, and in this way invites the ‘viewer’ to collaborate in completing the work. The responsibility for seeing and imagining is shared and held in relation. Framed in this way, the artist admits from the outset that the image is only ever partial. The image thus remains wide open to the many and varied possibilities that each new reality, view or imagining brings. The image, like a blue spring sky, remains expansive.

In Yoko Ono’s Five Dots (2014), the first image is of a circle of light blue sky, covered in part by white cloud. The ‘dot’ sits centred on a white background, which fills the Instagram screen. The accompanying text reads: “A blue dot from the Tokyo sky is in the center of the page. Spread its blue over the page into a sky you saw in your heart.”[vii] Other images in the series proceed in a similar way: a ‘dot’ of an image on a white page and an accompanying instruction to extend the image beyond the given centre. The final image in Five Dots (2014) is described by Ono as “A grey dot in the center of the page [is] from the wall which was once too high for you to see the other side of.”[viii] Her invitation to finish the work then follows: “Spread its grey over the page thinking of the day you broke out of the wall.”

In art, as in life, it is important to look beyond the image and the ideological prescriptions of its production. As practice, we do well to look at the sky, not just for optic relief from the images that inundate our newsfeeds today, but for the space to imagine how we might meet, make and share the world differently tomorrow.

Written by Rebekah Pryor. Rebekah is an artist, curator and early career researcher at The University of Melbourne, and lives and works on Bunurong/Boonwurrung country southeast of the city. www.rebekahpryor.com

[iv] Search engine heading for link to article by Phoebe Loomes and Stephanie Bedo, “Grandmother reunited with koala she rescued, using her own shirt, from fires in NSW”, 21 Nov 2019, https://www.news.com.au/technology/environment/grandmother-reunited-with-koala-she-rescued-using-her-own-shirt-from-fires-in-nsw/news-story/c884961e69f7f6b0462fd71737541bd9

[v] Loomes and Bedo, “Grandmother reunited with koala she rescued”.