Be still and talk with trees 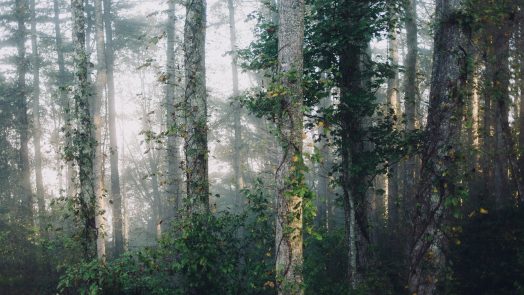 “The idea of quietly staring at a rock, piles of sand, or blinking stars for hours, if not weeks, seems, weirdly, profoundly countercultural today, in a world where people tweet bubbles, livestream the arching of eyebrows and spend holidays distracted by how best to market themselves on Instagram…” Julia Baird, Phosphorescence

There is not so much that separates us when we sit in silence. Silence, as Baird notes, feels almost countercultural. But it is silence that most religious and spiritual movements share. Silence, awe, and connection.

Phosphorescence is a kind of meditation in book form. Each vignette is a reflection on life, nature and being. It is a gift to the reader and an invitation to open ourselves to the world in all its beauty and ugliness.

Baird is herself a woman of faith. She speaks candidly in Phosphorescence of her experience with Christianity both inside and outside of religious institutions. She makes an elegant argument for the inclusion of faith in life as a kind of necessity for resilience. The world can be harsh and cruel. Faith regularly reminds us of the beauty of existence, and by doing so can save us from the depths of despair.

I was also raised in a Christian faith, as a member of a Baptist church. Unlike many drawn to new religious movements or nature-based faith, I did not leave the church because I had any negativity towards it. I found Paganism because it combined my love for the earth, with the deep sense of faith and connectedness I had already found in my church. In a sense, I simply swapped the church pews for a forest. Swapped my Sunday service for a simple ritual in nature.

For those readers unfamiliar with Paganism, there is a sense in which it can be read as provocative, an invitation to reject morality and live on the fringes of acceptable behaviour as a wild and liberated soul. And in a sense, this is not untrue. There is no dogma of Paganism as a whole, and no agreement on what exactly a Pagan is. Author Emma Restall Orr describes Paganism within the context of a broad history of Western mystery traditions:

“Paganism covers an… extensive range rooted within Western Europe and the diaspora of its peoples. Each tradition has emerged through different threads of ideas, histories, landscapes and theologies, each holding its own priorities, its specific religious and practical focus… Its expression may be filled with the keening entropic songs of the dead, with the sensuous dances of fertility or with the harvest’s sacrifice and joy; it may be twilit in its devotion to the gods of darkness, or always celebrating the gifts of the sun…” Emma Restall Orr, Living With Honour: a pagan ethics.

My own experience of Paganism has been deeply rooted in nature, and a reverence for the planet I find myself a part of. I most identify with the Western tradition of Druidry, a revival of the ancient practices of the peoples of the British Isles.

Druids find the sacred in the land, sky, and sea. We have deity in the form of gods and goddesses, but no dogma. We have ritual, but no obligation. Perhaps the strongest common thread between Druids is our attitude and relationship with trees. Trees, in my view, are the closest thing to gods incarnate. Like the Ents in J.R.R. Tolkein’s The Lord of the Rings, trees are understood as sentient living creatures. Trees and plants can talk with us and heal us. In the case of the Ogham, an alphabet used in Ireland and Britain between the 4th and 7th Centuries, trees are used as tool for divination.

Australian author and fellow Druid Julie Brett, in conversation with a walking stick, had a revelation. Humans and trees share connectedness with their kin. Trees are both separate as individuals, but connected as a forest, and the same goes for humans: “Yes, humans are one tree walking” says the stick, “All one tree.”

Talking with trees, or in this case sticks, might seem a little strange or even mad. For Druids like Brett, it is an experience that often happens spontaneously when spending time in nature. Visualisations, feelings, words, images, these come to those who are open to experiencing them. And we have a lot to gain by being open in this way.

Baird reminds us of Aslan’s message in C.S. Lewis’ The Lion, the Witch and the Wardrobe:

“…behind every earthly law is a deeper magic that defies logic: forgiveness of the unforgiveable, a selfless gesture, a moment of grace. That this grace fills galaxies, that the sun powers the planet and the moon pulls the tides, but the universe is largely unknown, spinning and vast, and that in itself is an ode to curiosity.”

In many ways Phosphorescence, like Druidry,is an invitation to be open to this magic. To be still, to notice, to savour. But one need not be a member of any Pagan, Christian, or any other formal or informal religious group to see the magic in the world.

Last weekend I had the distinct pleasure of partaking in a Six Elements Buddhist walking meditation with Deep Ecology Facilitator and Yoga teacher Anna Greer. On a windy Saturday seven of us walked silently through a popular track in Sydney’s southern region. We walked without shoes on, the aim to “kiss the earth” with our feet. We breathed with the trees and them with us.

Moving lightly gave us an opportunity to listen, to make space for the inhabitants of the forest to be with us, rather than run away from us as they so often do. It gave beauty a space to be.

As Baird asks: “…if generations of mystics and seekers have insisted that something connects silence with the sublime, you have to wonder who we would be if we paused more often.”

But nature is not always sublime. This time last year the worst fire season in history started its dreadful march across Australia, reminding us of the dreadful power of the planet to rip apart life as we know it.

As someone who finds sanctuary in nature what happens when, as Greer asked us: “Nature is no longer a refuge?” What happens when our wild places are damaged, severed, or unable to be accessed? In the age of climate change this will increasingly become a concern for those of us who find solace in our materiality and the beauty of the earth.

It is vital, no matter where we are, to do exactly what Baird encourages us to. To stop. To be still. To listen. To notice. And perhaps as the Druids do, to talk with trees.

Nature is everywhere, not just in the places we have designated as ‘natural’. We are embodied within the planet, not mere observers, or visitors on it. All we need to do is to open our minds to magic and beauty and there it is, giving its gifts freely to those who take the time.

“I have refused to live
locked in the orderly house of
reasons and proofs.
The world I live in and believe in
is wilder than that. And anyway,
what’s wrong with Maybe?

You wouldn’t believe what once or
twice I have seen. I’ll just
tell you this:
only if there are angels in your head will you
ever, possibly, see one.”

Written by Gemma Lucy Smart. Gemma is a PhD Researcher at The University of Sydney in critical studies of Psychiatry. She is currently working on the history of psychiatry in Australia and its relationship with new religious movements and spirituality. Her background is in Environmental Science and Human Geography. She is also a nature based Pagan and Druid who does, on occasion, talk with trees.

Images used are sourced from unsplash.com